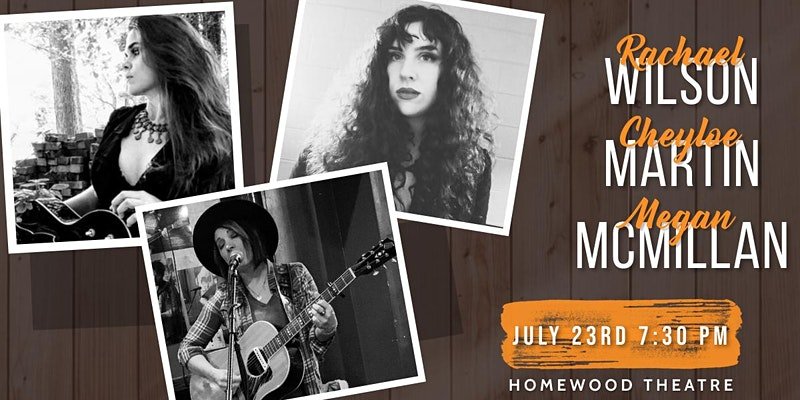 A triple threat of incredible singer songwriters makes for a great night of music!

Rachael Wilson is an American singer, guitarist, and songwriter, raised in Alexander City, Alabama. In addition to her passion for music, she also has an equal passion for animals, she has has five horses, six cats and five dogs. Music runs in the family. Her dad played guitar and sang, and Wilson’s mom had a voice with amazing range. Wilson’s gift with guitar stems from her grandmother, a woman who could have been good enough to make a go of it in Nashville. She identifies The Beatles, Nanci Griffith, and Joni Mitchell as some of her influences. She is excited about this performance at the Homewood Theatre Music Series as she will be able to focus on her own original material.

From the Hueytown area, Cheyloe Martin has been seen and heard all over the southeast including at the Bluebird Cafe in Nashville, Horsepens 40, and The Panama City Songwriters Festival. She taught herself to play guitar at 14 and learned what she knows about songwriting from listening to Sister Hazel, Led Zeppelin, The Who, and Everclear. She used those varied influences to create her own unique blend of folk, country, and rock. As can be heard in her songs, Cheyloe also comes from a musical family. She has enough great original songs to fill hours of music and will be displaying them at the Theatre.

Megan McMillan is from Centreville, AL and it is no hyperbole to say that Megan has played every corner of Alabama and all points in between. She writes folk / country songs with a generous dose of truth. She was named AL.com’s “25 Bands and Musicians to Know in 2019. “Things that Change”, the latest release from her, is a mix of simple stories about everyday life struggles, powerful wordplay on lyrics, and sweet southern traditional melodies. In addition to her own work, she is a co-founder of the Black Warrior Songwriter’s Festival and is always first in line when an Alabama songwriter needs help. Her talents truly shine in a listening room environment.

The event is finished.